If you enjoy the Raz Gazette, you’re going to LOVE this in-depth interview I did with Yitzi Weiner. We covered everything from medical clowning to workplace well-being to leadership styles to a story about my mentor. It is now available on two different sites, Thrive Global and Authority Magazine (yes, you can read it twice!).

If you were not among the 100+ folks on the webinar I did for the International Association of Business Communicators, you can catch the recording here (https://www.iabc.com/delving-into-the-art-of-storytelling-in-the-business-environment-2/)…

…and read my answers to some of the many questions here.

‘The Look’ is a 2-minute film subtitled “A story about bias in America” and created by Saturday Morning for Procter & Gamble (https://us.pg.com/talkaboutbias/). It looks at bias through the eyes of an African American man. The materials about ‘The Look’ say it’s about unconscious bias, although to me a lot of the bias in the film looks conscious so I assume that the unconscious bias is in the viewers’ minds in the final scene. What I see are a lot of micro-aggressions. Let me know how you see it. 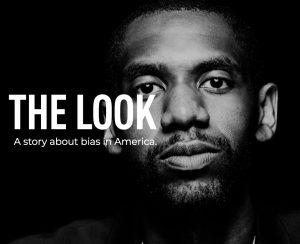 The first time I felt a lot of micro-aggressions was in the late ‘80s, traveling in Germany after spending a few weeks in Italy. In Italy, everyone looked at my black hair and beard, assumed I was a local and started chatting. My meager Italian got stretched to its limit in dozens of conversations, or micro-connections, every day. In Germany, I suddenly became invisible. A non-entity. This shocked and enraged me; full-bodied, blinding rage.

You may read this and say, “Welcome to my world,” but I had managed to get into my early 30s without understanding that simply being seen is a privilege.

Then the micro-aggressions started, including a woman on a bus smacking me with her cane to get me out of the seat she wanted. I thought, “They’re mad because I’m a Jew, living proof that they didn’t finish us off in the Holocaust.” But then I realized that frowns turned to smiles whenever I opened my mouth and American English came out. Jew, Shmew; they thought I was a Turk, a second generation unwanted immigrant. My play ‘Father-Land’, which is the backbone of the Nebraska section of ‘The Snow Clown,’ came out of my experiences in Germany.

Unconscious and conscious bias; privilege; micro-aggressions or micro-connections – these are issues for all of us, especially for artists.

“Our goal with this film (The Look) is to urge people to have an honest conversation and not pretend that unconscious bias doesn’t exist.”
– Geoff Edwards, co-founder of Saturday Morning.

“When we partner with creative people who believe in the importance of equality and inclusion, we can cre-ate stories like we’ve never experienced before – because creativity loves diversity.”
– P&G Chief Brand Officer Marc Pritchard

If ‘The Look’ intrigues you, click on Claudia Rankine’s graceful, story-filled article in the NY Times “I Wanted to Know What White Men Thought About Their Privilege.”
(https://www.nytimes.com/2019/07/17/magazine/white-men-privilege.html)