If you have Ukrainian or Russian friends, hold them in your hearts as you read the news. Some of them are in danger, all of them have families and all of their families are in some kind of danger. As I write this, Odessa is under attack and two people I love and deeply respect are from Odessa.

Here is an excerpt from Chapter 17 of The Secret Life of Clowns that was inspired by these friends:

Oksana and her husband Maxim are from Odessa. They have been circus performers for over three decades. The story goes that Dominico hired them onto ‘Corteo’ after luring them away from a Russian show called the ‘Lilliputian Circus’. Oksana and Maxim are both under three feet tall…The act that Dominico created for Oksana, called ‘Helium,’ is my favorite act of the show.

‘Helium’ is a simple routine that contains, in its five minutes, everything that is profound in circus.

For ‘Helium’, Oksana has six huge helium balloons attached to her belt so she weighs less than a pound. In the wings I float her up and hold her feet in my hands. On cue I walk to center stage while moving Oksana’s feet back and forth so it looks like she’s walking five feet above the ground. Then I gently push her and watch as she floats out over the audience. From 20 feet above their heads, Oksana makes quips in Russian and English, her squeaky voice supplying the perfect soundtrack to the image of a tiny woman floating through the air.

Every time Oksana loses altitude, someone in the crowd catches the bottoms of her feet and gently pushes her back up toward the tent top. They are touching a performer’s sole. They are changing gravity. They are creating wonder.

Gravity and wonder — the building blocks of circus.

After a few minutes of floating and catching, I convince someone to push her back to me. Since our stage bisects the audience, I then float Oksana off on the other side. Helium is a well-structured improvisation for one tiny Ukrainian actress, one large American clown and 2,800 spectators.

Structure and improvisation — the tools of every clown. 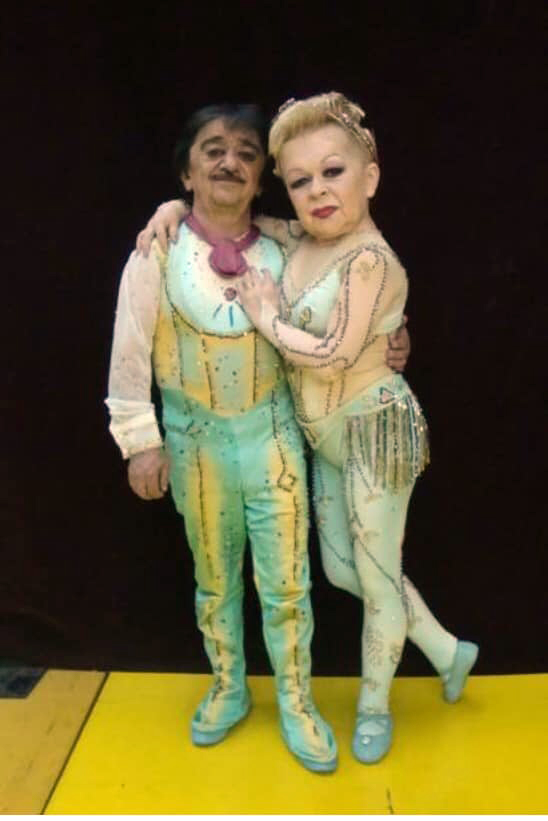