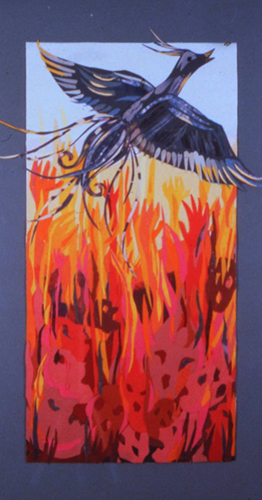 Zip stands close and stares at Miranda Martinez as the emcee tries to introduce Bob Meadows. “Zip, I hope you’re enjoying your show.” Miranda turns to the audience, a little nervous. “Let’s give a big San Francisco ‘thank you’ to Zip Abrams for bringing us all together…although it’s not the way we’d hoped…of course…but still…”

Virginia Barre is half out of her seat, trying to body English Zip back into the audience. Her legs cramp and she realizes that, under her joy of being the impresaria of an historic event, she’s been coiled, waiting for this moment, the moment when Zip falls from the heights of hero clown to the depths of demented old lady, the moment Virginia’s beautiful show goes south. Frank said not to worry, that the performers were ready to make whatever Zip does seem right and good but, frankly, Miranda looks completely lost and the audience is squirming.

“Zip, why don’t you go sit down and watch your old partner, Bob Meadows? This is the big finale, the moment all these people have been waiting for.”

Zip stands and stares at Miranda, smiling. Not moving.

Frank Singer sees Jackie Amarillo in the opposite wings but she’s not moving, either. He waves, catches her eye and jabs a finger in Zip’s direction. Jackie holds up a ukulele and shakes her head “no.” Bob Meadows’ ukulele. As loyal as Jackie may be, a young clown is not going to miss a chance to hand her hero, Bob Meadows, his ukulele.

Frank fluffs up his dress and enters stage left. The audience cheers, mostly out of relief. Miranda looks at him with “help me” eyes but Zip just keeps staring at the Emcee. Frank sweeps across the stage and taps Zip on the shoulder. She turns, looks him up and down and smiles.

“Zipporah Abrams, may I have this dance?”

Frank takes her in his arms, the band improvises a slow waltz and the two clowns dance across the stage, their dresses flaring as they turn and swirl. They make a circuit and exit into the wings.

Over the sound of clapping, Virginia hears noses blowing all down her row. She swallows, wipes her cheeks and tries to get comfortable. It’s easier to enjoy a benefit show when you don’t have to see, right there on stage, the reason you need to have a benefit show.

“Without further ado, the one and only Bob Meadows!” Miranda races off stage as the band plays Bob’s entrance music.

In the wings, Frank keeps dancing with Zip, trying to stay between her and the stage. Maybe if she focuses on him, Frank, she won’t interrupt Bob’s act. Zip is content for a couple of minutes but when Bob starts strumming the ukulele, Zip stops dancing. Bob is playing the song that he and Zip used to play together, many years ago, as the lead-in to their act.

Frank is trying to move Zip away from the stage and Zip is getting agitated. The A.S.M. comes over to help but only makes it worse. Now Bob is singing and Zip hits Frank in the chest.

Frank steps back, motions the A.S.M. to do the same, and they watch Zip march out on stage.

“Zipporah Abrams, I’ve been waiting for you.” Bob plays a final chord, takes Zip’s arm and leads her center stage. Two spotlights hit the duo. Frank says a silent “thank you” to John Quan. The old partners stand side by side, looking out at the audience. “Didn’t you have something to tell me, Zip?”

From her seat, Virginia sees Zip’s body shift and her breath get deeper. A little smile flickers across her lips and her eyes focus on the audience.

“You know, Bob, I just remembered what I wanted to tell you.” Her voice is brittle but it fills the theater. “Wait, I forgot again. OK, I remembered again. I was here yesterday—or was it earlier today—or the day before yesterday…”

“Which is it Zip, yesterday or today?”

“How long have we been rehearsing this funeral?”

“Now I remember, Bob. It was today, right after lunch, which was a bit Spartan for my tastes.”

Zip’s inflection is flat, like a robo-call, but she knows the words and her timing is perfect.

“Zip, what happened right after lunch?”

“You know, Bob, for a second I couldn’t remember exactly where the little girls’ room was.”

“You didn’t know where the lady’s room was?”

“I should know, you know, because I’ve done a lot of shows here, a lot of funerals – ‘They croaks, Zipporah jokes’ that’s my motto. So I know where the bathroom is. Hell, I’ve done number one and number two in that bathroom…”

“Hold your horses, Zip. We don’t need all the details.”

“As I was saying, for a second, after lunch, I couldn’t remember how to locate the loo and believe you me, I had to go. Actually, come to think of it, I have to go right now....Wait.”

Zip cues the drummer and starts to go into a squat. Her knees buckle and she hits the stage. Hard.

One thousand and forty people gasp. They gape, silently, as Bob Meadows tries to help Zipporah Abrams get up off the Geary stage. He seems to be moving in slow motion. The theater floats in suspended animation for what feels like ten minutes but is probably twenty seconds. Then Ellie Abrams yells, “Mooooom!” and rushes the stage with her father right behind her.

The spell is broken, the audience screams and the whole cast rushes out to see what went wrong. Zip doesn’t move. Fear grips the theater. Virginia thinks, “She’s dead. We killed Zipporah Abrams.”

Even with Ellie and Luca’s help, Zip isn’t standing. She doesn’t seem to want to stand. Frank clears the rest of the cast away and kneels down to help lift Zip. He’s done this before, when his mother fell and he picked her off her kitchen floor, so the dress and the flap shoes aren’t too much of an issue. But Zip won’t move. Her eyes are open, she’s breathing but it’s like she’s glued to the stage.

Frank is scared now. His boss clown instincts kick in — the show must go on and it’s his job to take the audience’s eyes away from the fallen performer.

Frank turns upstage and points at David Carter. The bandleader stares, then gets the idea and frantically shuffles through his sheet music looking for the right tune. Frustrated, Frank runs toward the bandstand and the slap of his huge shoes on the wooden stage sound like gunshots. The theater gets very quiet.

Before he gets to the band, Sparks steps between Frank and David Carter. The two performers freeze in an OK Corral tableau with a clown in a dress as Wyatt Earp and a New York comic holding a toy schnauzer as Ike Clanton. Sparks is the first to move. She turns to face the audience, opens her mouth and starts singing in a voice that has more volume than pitch.

“Amazing Grace, how sweet the sound…”

David Carter finds the nearest key and whispers to the band, “Amazing Grace, in F major, from the top on my cue.”

David yells, “Sparks, from the beginning again. We’re with you.” The band plays and Sparks sings, “Amazing Grace, how sweet the sound,” even louder. David is now singing along. The band hits a groove. Frank joins in. The schnauzer barks and Zip lifts her head. She smiles and slowly struggles to her feet, leaning on her husband and daughter. The audience cheers and the band brings the song around to the top again.

“Amazing Grace, how sweet the sound…”

The rest of the cast joins in.

Virginia Barre turns her back to the stage, looks out at the audience, her audience, and yells, “Everyone! Sing!”

"T'was Grace that taught my heart to fear
And Grace, my fears relieved…”