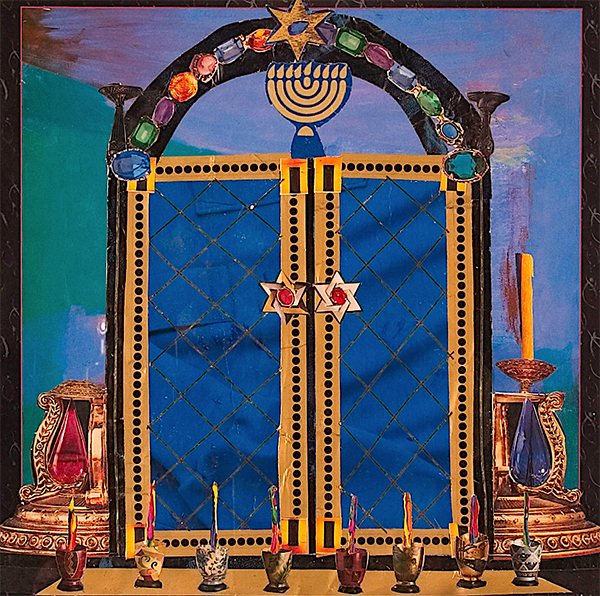 The new assistant rabbi is stumbling his way through the Shabbat service. Deborah Matz, his boss, is sitting upstage of him on the bema, radiating trust and support. Frank Singer is in the balcony, last row, last seat, radiating angst.

He came to temple tonight to get away from Jackie’s apartment and Zip’s show and his lack of a personal life and the cycle of death and disease and to hear Rabbi Matz’s soothing voice and sagacious words. Sitting in the beautiful old synagogue, staring at the domed ceiling with its gilt trim, listening to someone who isn’t Deborah Matz struggle with his lines and fumble with his script isn’t doing the trick. He closes his eyes and slides into a half sleep.

A long silence wakes Frank as efficiently as a gunshot. The assistant rabbi is looking at his papers while the congregation sits quietly, nervously, waiting. He looks up, smiles sheepishly and keeps shuffling papers. Finally, he leans into the microphone and says, “Someone is definitely doing the third aliyah but I don’t know who…”

An overdressed tween with straight black hair and brown skin starts to walk towards the rabbi. “Ah, thank you. As I was saying, would Hector Goldman please join me on the bema for the third aliyah.”

The boy is so short he needs to stand on a stool conveniently hidden behind the podium. The assistant rabbi carefully adjusts the microphone and stands next to young Hector, ready to help out if needed. Hector takes his notes out of a back pocket, flattens them on the dais and adjusts the mic again. He stares at the assistant rabbi until the clergyman takes a step back. The temple is tense – this service isn’t going well and now we’ll be subjected to a kid butchering Hebrew.

Hector Goldman stares at the congregation with big brown eyes. Frank is starting to wonder if he’s frozen, “gone up” as actors say, when Hector opens his mouth and beautiful, musical Hebrew fills the synagogue. Hector’s aliyah is long but he doesn't stumble, doesn’t hesitate, doesn’t look down at his notes, not once.

After he finishes, there’s a different kind of silence before the congregation bursts into applause. Hector looks up at the balcony, hard, proud eyes and no smile. Whatever this boy has to prove, he’s just proven it. He’s made it very clear that he will not be underestimated. Frank smiles and nods, a boy after his own heart.

Hector collects his notes and walks slowly back to his seat. The assistant rabbi steps forward and congregation stops clapping quickly – we’re in temple, after all, and this is Shabbat. The rabbi’s eyes follow Hector until the boy’s mother engulfs him in a huge hug. The rabbi adjusts his tallis and says, “Let’s have another hand for Mr. Goldman. That was magnificent.”

During the applause, Frank slips out of his seat, down the stairs and onto the street. He’s got what he needs, different than what he came for and far more valuable. A nervous little boy and a brand-new rabbi just saved Shabbat service, improvising and making each other look good. They’ve given Frank the story he needs to launch the rehearsal of Zip’s “End of an Era.”

“…That was Friday night. Tonight, I invite you all to channel Hector Goldman.” Frank is sitting on the lip of the Geary stage, legs dangling. “When something goes wrong, with Zip or with the tech or with anything else, step up, and say, 'It’s me' like Hector did. And then, when you’re center stage, sing out like your pride depends on it. Because it does. This is Zip’s show, yes, and it is also your show, our community’s show. Tonight is a chance to live our history, our love, our compassion, our rachamim.” The performers, scattered in the first three rows of seats, clap lightly and nod their heads.

Frank stands up onto the stage, “Now let me turn it over to our stage manager extraordinaire John Quan to give you a quick tour of the theater and get everything worked out in…how long, John?” The stage manager looks at his watch, ‘Forty-seven minutes, Mr. Singer.”

“Right. Forty-seven minutes to tech a one hundred and twenty minute show. No problem.” The younger performers laugh, the veterans look grim. “John assures me we’ll have time to spare, especially since Bob Meadows won’t be here ‘til half hour and Sparks’ plane isn’t due to land at SFO until after we’re done with the rehearsal. Zip will also join us at half-hour.”

Forty-five minutes later, the performers are off in their dressing rooms or eating in the green room. John Quan stands in front of Frank Singer, center stage, and taps his watch. Frank gives him a big, unreciprocated bear hug. “You rock!”

The will-call ticket window, a few doors down Geary Blvd from the theater, is bustling by 6:30. Two jugglers and a stilt walker are on the sidewalk by 6:45 and the theater doors open at 7:00. Zipporah Abrams is standing in the lobby ready to greet the crowd. Jackie Armarillo and Berit Aagbergsdotter are right behind her.

Aleksander “AKA” Aagbergsdotter-Swartz, is in the green room perched on the arm of an old couch. His fingers are flying as pictures of Miranda Martinez, Ellie and Haviva, Tina Edgars, David Carter with his bass, Isabel Sanchez, Bob Meadows and a dozen other clowns, musicians, stagehands and acrobats in various stages of undress come to life on his 11X17 sketch pad. The performers pose and tease and ask for copies.

The lobby is full of Magda Singer’s paintings, each with a label written by Berit. Virginia Barre is putting up signs saying, “For Sale – All Proceeds go to Support Zipporah Abrams” on any blank piece of wall she can find. Better this than an auction at intermission.

In the theater, a video medley of Zip’s five-decade career is playing on the big screen, everything from Shakespeare to circus, Moliere to Miller, Carol Churchill to commedia dell’arte, Dario Fo to Athol Fugard.

Frank Singer has finally gotten Sparks and her entourage (yes, she has an entourage) settled into a dressing room – the first three they inspected were deemed too small. He is now slapping on make-up. The act with Tina Edgars, the one with the pink dress, kicks off the show, right after Zip greets the audience and settles in with her family in their box seats. After powdering and polishing, Frank decides to take a leak before getting into the dress. There is a line at backstage john so he slips through the lobby and downstairs to the men’s room across from the theater bar.

On his way out he hears, “Frank Singer! I thought I’d see you here. What’s it been, twenty years? Twenty-five? Too long, my friend, too long.” A guy about Frank’s age is standing at the bar, waving. Frank stares. Nothing about this man is in the slightest bit familiar. “Frank, you don’t look nearly as bad as I hoped you would.”

Frank opens his mouth but nothing comes out. His brain is desperately trying to process the double negative. It is a double negative, right? So that makes it a positive, a compliment? But what did this guy hope Frank would look like? Or is it a joke about the make-up? Or is it an insult? Maybe that’s just how old farts greet each other these days.

Frank finally says, “Great to see you, man. Gotta get this show on the road” and bolts back up the stairs and into the theater.