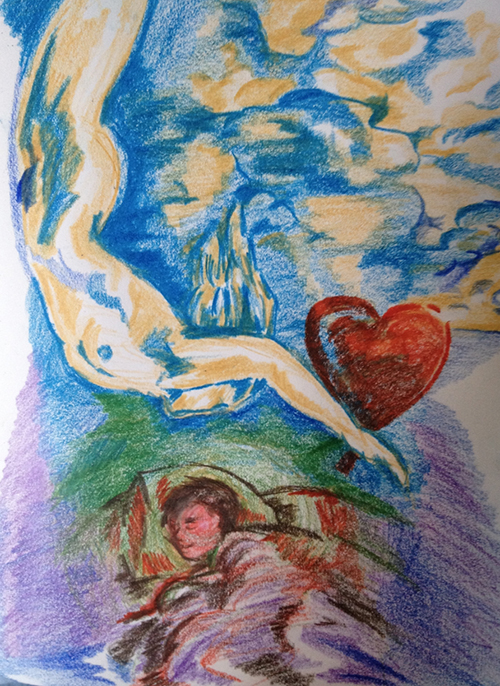 Chapter 60
Time is of the Essence

David Carter has been leading circus bands for decades, writing the songs, playing his bass and singing with a voice as raspy as Tom Waits’ and as nimble as Freddie Mercury’s. He’s a tall man, a little stooped now, with thick grey hair, a short grey beard and his signature porkpie hat. “Frank, I’m worried about Zip. You’re going to let her just wander on stage any time she wants? We got acrobats and aerialists. She’ll get herself hurt.”

They are sitting in David’s kitchen/dining room, drinking hot tea.

"We’ve only got one acrobatic act and no aerials because they can’t rig at the Geary.”

“Still, don’t you think Zip’s going to be a problem?”

“She’s not a problem, Dave.” Frank’s teacher voice creeps in, and then overtakes, his colleague voice. “She’s the star. See, what I’m trying to do is make a show for a star who’s got dementia, who sometimes can’t find the next thought, doesn’t know always know where she is and whose mind fogs up like Land’s End. A star who gets scared whenever her world turns strange, and it turns strange a lot. Our job is to keep her from getting scared.”

“Maybe you to get need different acts. And a different band.”

“No, no. Dave. Same acts, same band but a different point of view. That’s the beauty part. We don’t need different acts, we need different attitudes, different ambitions, different aspirations. Instead of the usual – make your tricks, land your jokes, hit your notes and wow the crowd – we need to adapt to whatever Zip does, to make sure she is always right and good. We can’t let the fog settle in Zip’s mind, can’t let her world turn strange. And if it does, when it does, I guess, cause it's going to be a long show, we have to make sure we’re there to hold her hand, even if it kills a laugh or messes up a song. This means you’ve got to be ready to change the music mid-note, to play for Zip no matter what she does.” Frank stops, realizing that he’s up on a soapbox, lecturing to a cynical old jazz man in his own home, not the most effective strategy.

“So I’m going to tell the guys who are playing for free in front of 1000 people in the gilded Geary that we’re going to sound like shit?”

“Come on, man, you’re all jazz players, you know how to improvise.”

“Frank, we improvise over chord changes, not over dementia.”

“So the show might get a little avant garde. You telling me you’re too old for the cutting edge, Dave?”

As David Carter rips off a string of tasty insults that were popular in Bay Area clubs forty years ago, Mike Jagger starts singing in Frank’s pocket. David doesn’t stop cursing as Frank holds up a hand and takes the call into a tiny half bath off of the kitchen.

“Frank? Miranda Martinez here. Look, I’m really excited about emceeing Zip’s show and all but I’m worried about Sparks. She’s coming all the way from New York and she’s the big draw, you know…or maybe you don’t cause she’s really big in the women’s community and, well, we love you and all but you’re still a guy.” Miranda’s laugh, famously infectious, makes Frank smile despite his trepidation that this call is not going to end well. He says, “I know Sparks is a big draw. Even us guys love her.”

“Yeah, good. So Sparks calls me this morning, really early cause she forgot about the time change, and she’s thinking of cancelling cause you’re only giving her five minutes. Frank, we’ll lose a lot of folks if Sparks cancels so I’m wondering if you can give her a little more time.”

Frank sits down on the toilet. With Virginia negotiating another few minutes for Luca’s video and Ellie’s mirror act getting longer every day, Frank can feel the show slip away from him. He’s sat in the audience for too many interminable benefits, each act going so long that by intermission he’d walk out if he didn’t have stay until the bitter end, and then some, to hug his sweaty friends and feign excitement. He’s never directed a show like that and he’s determined that this one will not be his first. Besides, he doesn’t like getting blackmailed, especially not second-hand blackmail.

“Miranda, I’m glad you’re excited about the show; it’s going to be historic. And I’d love to give Sparks more time but it’s already running over two hours plus intermission.”

“I know, I know, but her comedy is improvisational so she’s only getting warmed up in the first five minutes.”

“Look, Miranda, I hate to put you in the middle of this. Why don’t I call Sparks and work this out?”

“Yeah, that might not be so good. She asked me to talk with you and I’m kinda concerned myself. You know, if her act doesn’t fly because it’s too short, that will make my job harder, you know what I mean.”

So this is first-hand blackmail, too. Frank can’t lose both his star comic and his emcee, not at this point, and Miranda knows it. Through the bathroom door, Frank hears David’s bass playing a blues line that opens up into the Robert Johnson classic Crossroads.

“I went down the crossroad, fell down on my knees.”

“OK, Miranda. I understand what you’re saying. Would you tell Sparks that, since she’s coming all the way from New York and her style is so wonderfully improvisational, I would be happy to give her a double slot, twice as much time as everyone else on the bill. Will that work for both of you?”

“Perfect! Thank you for being so understanding, Frank. You’re a gem.”

“No problem, Miranda. I’ll put Sparks down for 10 minutes. Max.”

With a week to go, Virginia Barres’ to-do list is finally getting shorter. John Quan, the Geary stage manager, is a godsend, taking care of all the backstage details without an ounce of drama. He has even convinced Frank that the one-hour time slot that they have to do lights, sound, props and blocking for the entire show is going to be more than enough.

A new item on her to-do list is Frank’s bright idea to auction off some of Magda’s paintings. How Frank, who’s been so worried about the show going too long, got the idea that an art auction at intermission will be a good idea, is beyond Virginia. Magda was a really good painter but it will be a theater crowd, not a bunch of art collectors. And even if they were collectors, Magda’s art isn’t really collectable, at least not if you’re thinking about it as an investment. Virginia’s been ignoring the whole thing, hoping that Frank will forget.

Thinking about Magda gives Virginia an idea – ask Berit Aagbergsdotter to be the head of the Zip Patrol. She’d be great at it and, if Frank’s finally paid her for all her night shifts with Willa Woods, Berit might even volunteer. Hell, Virginia will find some money to pay her, if it comes to that. Zip has to feel safe and taken care of the whole time and Berit is a pro. Virginia takes the idea to Frank.

“So you’ve paid her back for taking care of Willa?”

“Mostly? Frank, you sold Magda’s house a month ago. What did you do with the money?”

“Virginia, you’ve never sold a house. They don’t just hand you cash. There’s escrow and probate and piles of papers to sign. Some day you’ll understand.”

“OK, OK. If it will get her on Zip Patrol for the show, I’ll pay Berit the last couple of grand out of the money I’ve been saving for a deposit on an apartment. Jackie doesn’t mind me on her couch. Too much.”

Virginia doesn’t take the bait. “Good. Can I get that check right now? I’m heading over to Berkeley tomorrow.”

“Oh, OK. And if you’re going to see Berit anyway, would you ask her about helping with the art auction? Maybe she can write something about how each piece was made, establish provenance, tell the “story of the art,” all that stuff that raises the price. If we can sell 20, 25 paintings, I’ll be able to get rid of the storage unit next month.”

Virginia makes noncommittal noises about the auction, takes the check and leaves quickly.

When Virginia hands Berit the money, the Norwegian agrees to be Zipporah’s handler at the show, with one caveat: Virginia has to invite her son Aleksander to sit backstage and sketch the performers. “He won’t be able to resist drawing circus performers, like Chagall and Degas in Paris at the Cirque d’Hiver, and I will know he is safe and sober for one night.”

Virginia agrees and writes, “Find backstage portrait artist” at the bottom of her to-do list. Then she crosses it out and smiles. A true impresaria.