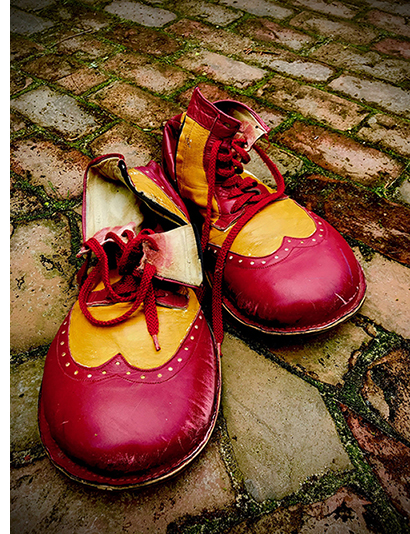 Zipporah (Zip) Abrams is killing it with her crazy old lady act. Frank Singer stands in the wings wearing a wet pink dress on his body and a big smile on his face. Zip and her old partner Bob Meadows were his favorite clown team and since Bob moved to New York a decade ago, Zip’s been the one. She read the phone book at Frank’s fortieth birthday party; for real, she read a list of names out of the San Francisco white pages. It was so funny Frank went home and ripped out the page -- Shahbaz Butt to Craig Bystrynski. It’s still in his folder labeled “Monologues for Future Auditions.”

Zip’s daughter Ellie is following in her mother’s large footsteps. Even being pregnant hasn’t slowed Ellie down much and her machete juggling act gets stranger and more uncomfortable to watch the larger her belly grows. A chip off the old block.

“…Am I talking too loud? I’ll whisper. Loudly. So the back row can hear.”

Zip Abrams flicks her long white hair out of her eyes. She is as wild as Hetty de Brun was, but she’s wild in the key of diva.

Zip points to the back of the theater and stage whispers to the front row.

“They’re too cheap to buy good seats! But we shouldn't hold that against them. We shouldn't hold anything against them, not these days. I held my chest against a buff little actor boy the other day and they threw me out of the theater. Said I shouldn’t get fresh. I said, ‘Honey, it’s been years since I've been fresh.’”

Zip is pointing to her crotch, or to the red flower patterned dress that is covering her crotch and most of her legs. A big laugh.

“Oh, wait, I just remembered what I wanted to tell you…Wait, I forgot again. OK, I remembered again. I was here yesterday—or was it earlier today—or the day before yesterday…”

She looks off stage right and hollers.

“Willa, how long have we been rehearsing this funeral?”

“No answer. Well la-di-da. She’s been yelling at me all day and now, when I need her most, radio silence.”

“Wait, I remember, it was today, right after lunch…”

She yells off stage right again.

“…which was a bit Spartan for my tastes!”

“Anyway, it was right after lunch and for a second I couldn’t remember exactly where the little girls’ room was. I should know, you know, because I’ve done a lot of shows here, a lot of funerals. ‘They croaks, Ziporrah jokes’ that’s my motto. So I know where the bathroom is. Hell, I’ve done number one and number two in that bathroom…"

Zip sashays toward a good-looking young man in the second row, running her hand seductively through her bright white hair.

“…and I’d be willing to try numbers three, four and five with you, sweetmeats.”

The man laughs nervously, the audience howls and Zip walks back center stage.

“Sorry, I got distracted by his joie de vivre. He’s got a really cute joie de vivre. Back to my predicament: For a second, after lunch, I couldn’t remember how to locate the loo and believe you me, I had to go. Actually, come to think of it, I have to go right now....Wait.”

Zip cues the drummer and does a dance comprised of a series of deep squats. She’s still as graceful as she was thirty years ago.

Applause, Zip curtsies and then goes back to the young man. She’s now moving and talking like Betty Boop.

“You would have taken me to the loo, wouldn't you sweetums? If I'd'a had to go? And if we'd've gotten lost on the way, you could have taken me, right there in the hallway, 'cause I’m not wearing anything under my bloomers.”

The guy is laughing hard and shaking his head “no.” Zip flips up her dress to reveal bright orange boxer shorts. The guy covers his eyes and the audience screams. Zip now stands center stage showing off her orange underwear. For a long time. Finally, she drops her dress and cues the band.

In the wings, Willa Woods taps Frank Singer on his bare shoulder “You’re on as soon as Zip finishes this dance number.”

Mick Jagger starts singing off in the distance.

“Is that your phone?”

Frank gasps, lifts his skirts and races to the dressing room.

At the clothes rack, Frank digs the phone out of his pants pocket and flips it open.

“Oh, Frank, I’m so glad you answered.” His mother’s voice is thin and breathy.

Relief almost floors Frank. He blurts out, “When?”

“An hour ago, but I didn’t want to bother you, I know you have that show with Willa, but I can’t pull myself up on the chair and I think my leg is…”

“Oh, thank you dear. I hope you’re not too busy. Just remember, don’t call 911! I will NOT go to a hospital! I will not die on their terms! It is your responsibility--”

Frank snaps the phone shut, grabs his car keys and runs out the back door of the theater. Willa sees him go and hurries to the other side of the stage to find Frank’s clown partner, Tina Edgars, waiting in the wings dressed in a tiny tuxedo. “Your act is off. Frank had to go. His mom…”

A burst of applause, Zip walks by with a huge grin on her face and then the theater gets awkwardly quiet. Willa and Tina step onto the stage to improvise...something.

Out on the street, it’s still raining so Frank throws the skirts over his arm and runs as fast as his clown shoes will allow. The neighborhood is full of pub-crawlers now but a large man in clown makeup running in a pink dress barely pulls a look.

Driving his 12 year-old off-brown Datsun as fast as he can through Bay Bridge traffic, Frank gets to Berkeley in just over 20 minutes. As he turns off Martin Luther King Jr. Boulevard onto his mother’s street, he sees the flashing lights. “Fuck no! Who called 9ll?"