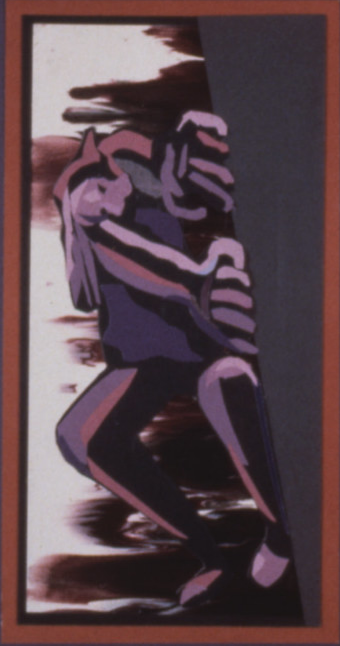 When Frank slips back into the room, Willa is fast sleep. He collapses into the bedside chair.

“Willa. Willa!” Her breathing is rhythmic and her eyes are closed. “Willa, you really didn’t recognize Dr. Weinberg? I thought you were completely cogent when we talked with him last time, more cogent than Jackie or me. Were you faking it the whole time? Damn, Willa, I’m trying to take care of you but…”

Frank sits back and the jet lag sweeps over him. He quickly leans forward again, slaps his cheeks and keeps talking. “I’ve only got a day here, Willa, thirty-three hours before I have to fly back to Amsterdam. We’ve got to talk about this, if you’re really giving up, really ready to die.”

He rubs his eyes and looks around the hospital room. It’s full of life, festooned with juggling clubs, rubber chickens, hand-picked flower arrangements and an old circus poster from London’s Royal Albert Hall with Willa’s clown face right in the middle. Frank smiles and switches to an awful British accent, “Dying’s a sticky wicket, old girl. If a bloke says dying is easy, you know he’s a pure wanker. Daft. Details, by Jove, too many bloody details when yer dying, what? Well, stiff upper lip! Tally ho and into the valley of death…”

He half stands, wielding an imaginary sword, and tweaks a muscle between his ribs. Leaning back into the seat cushion, trying to smooth out the tweak, jet lag overcomes Frank Singer.

He’s been out for twenty minutes when his head snaps painfully backwards and he snorts awake. Willa is still asleep. He picks up his monologue in a hoarse whisper.

“We better work on your will while I’m here, and set up home hospice. I’m an expert, you know; lots of recent death and dying experience, ma’am. Seriously, maybe I can get Berit to help; she’s good. But only if you tell her you don’t want your dead body ritually washed. Against your religion or something. Anything."

“Speaking of bodies, you need to give Jackie all the info about getting your brain to Harvard. Are we supposed to send it UPS? FedEx? Hand deliver it? And how do we get the damn thing out?” Frank laughs quietly, laughter that turns to crying. He wipes his cheeks. “Laughing to Crying” is an exercise that every clown student learns early on, an exercise that Frank never could master…until now.

“And we’ve got to talk money, Willa. Hospice ain’t cheap, even if Jackie and some other folks take shifts for free. And I need to get access to your account so I can pay your bills…and my bills, for that matter. My Cirque checks have been deposited into your account, right? Shit, and I have to cover the credit card for my plane tickets – you know I hate paying interest to fucking Visa.”

Willa’s eyes open for a moment, she scratches her arm near the IV port and goes back to sleep.

“Willa? How long are you going to sleep? We’ve got a lot to do before I go…you know…go back to work. I have to go back to work. You know that, right? You know? You’ve got Jackie and Virginia and Zip, I guess, and Isabel and Tina and the whole medical team so I don’t have to quit the best gig I’ve had in years, right? I’m the Dead Clown of Corteo! Hey, I just thought of it – I can take this trip off my taxes because I’m doing research for the role right now. I’m watching you lie in a bed and pretend to be dead while people talk to you. Well, not people, just me, but you get the idea. I have to do that every night and twice a day on weekends. You’re really good at playing dead, Willa. Really good. Willa. Willa! You’re freaking me out now.”

Frank calls the nurse, who assures him Willa Woods is still alive.

What to Do When Willa Woods Dies
Very Important Information; Time Is Everything In This Process

Willa spent many precious hours making these arrangements; please follow them immediately after she dies. Her body must be moved to the mortuary and refrigerated within 3 hours.

Calls to make IMMEDIATELY, in this order:

Jackie pulls ten copies of “What to do…” out of the hospital Xerox machine, printed on purple Astrobright paper, and takes them to the room for Willa to admire. Frank is already on a plane back to Amsterdam, back to the good life of an international circus star, leaving Jackie with this macabre checklist, Willa’s half written will and some signed checks to pay Berit and the first wave of home hospice folks. But Jackie’s happy – Willa goes home tomorrow. They got word over lunch, before Frank left for the airport. Jackie jumped up and down, high-fiving the day nurse while Frank talked details with the doc. Willa got surprisingly glum. “I’m scared to go home to die. I don’t want to be a chicken shit.”

After the hospital staff left, Jackie said, “Willa, you’ve never been a chicken shit a day in your life.”

“I am now. I need help, Jackie, but not the kind you and Frank can give me. Sorry, Jack.”

“You are not, Jackie Amarillo. But right now I need help with my soul. You know I gave up on church a long, long time ago so it can’t be a priest. I need a rabbi.”

Jackie said, “Frank, we could call the rabbi that did your mom’s memorial, couldn’t we? She was good. Do rabbis make house calls? I mean, when there isn’t a memorial and, you know, when the person isn’t Jewish?”

Frank called Rabbi Deborah Matz who agreed to visit Willa at home the next week. Jackie went through her to-do list with Frank one more time before he caught a 38 Geary bus to the BART station to catch a train to SFO and a plane to Amsterdam.

Now Jackie has to get all the prescriptions from the docs and arrange for the hospital bed to get delivered before she can drive Willa home.

This whole death and dying thing is a full time job.