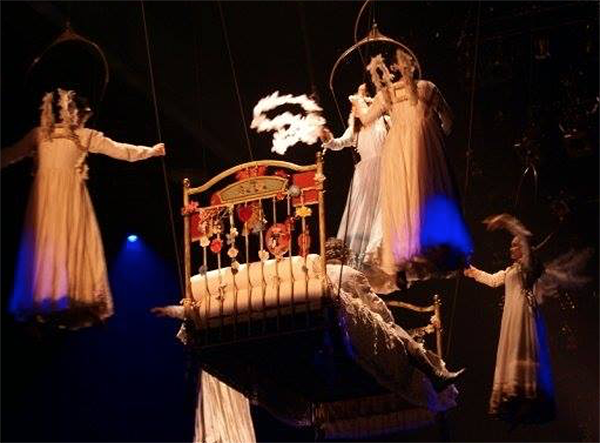 “No, Willa, we’re not in Paris. We’re in a field that’s a few of kilometers from a town where you can catch a train, transfer to the métro and be at the Eiffel Tower in a little over two hours.” Frank Singer is sitting at a Cirque du Soleil computer in the cook tent talking to Willa Woods on Skype. Everyone except the kitchen crew has gone back to the hotel after a sold-out Thursday night show.

Willa is still in her bathrobe, sitting in the kitchen nook of her S.F. flat, nibbling a grilled cheese sandwich and sipping a glass of sweet iced tea. “But still, you will be performing for thousands of Parisians every day and then going out to eat escargot and drink vin rouge with really cute aerialists every night.”

“Willa, your image of the Cirque touring life is a bit overly romantic.”

“Oh, what did I get wrong? Are you going out with the slightly less cute aerialists or the really cute contortionists?”

“No! Really!? Did you finally start playing for our team? Frank, I knew you’d see the light, eventually!”

“Frank, please – let me have my fantasies.”

A tall skinny man wearing a hairnet comes out of the kitchen to tell Frank that the last shuttle back to the hotel is leaving in 15 minutes.

With time running short, Willa switches from banter to basics:

When does Frank finish rehearsing and start performing? Next Tuesday.

What is he doing until then? Shadowing the actor he’s replacing to learn all the little backstage details.

And then the most important question:

How many gorgeous women does Frank have his eye on? The Polish foot juggler is badass but half his age and the violin player from Austin, Texas is a sweetheart but married.

Some lights go out in the kitchen and Frank quickly asks about Willa’s last visit to the oncologist.

“Almost half-way through this chemo and the markers are still good, tumors are holding steady and I’m feeling fine.”

“On the cheek or on the lips?”

“Damn, Willa, you are feeling good.”

On Tuesday morning Frank is out of his room by 9:00, walking the three kilometers from the hotel out of town to the circus tent. The security guards say, “Bon premiere!” as Frank flashes his backstage pass.

Instead of getting some coffee and breakfast, he goes straight to the road manager’s trailer to pick up his per diem for the week.

“Merci.” Frank signs for the cash.

“Can I get a hundred euro note and then four twenties and small bills?”

He can’t. The road manager gives nothing bigger than twenties so the performers don’t have to try to get change for large bills in a foreign country.

Frank takes his cash back to town, finds a bank and, after a lot of explaining in garbled French, trades five twenties for a hundred euro note. At the hotel, he puts the bill into one of the airmail envelopes addressed to his landlord. The concierge directs him to a post office where he buys three stamps, all circus themed – le trapéziste, le jongleur and le clown blanc – puts them on the envelope and ceremoniously drops it in the slot.

“There’s your pound of flesh, George.”

Frank hurries back to the tent, arriving just in time to practice the flying bed act one last time. Helen, the violin player, brings him in a cup of thick black coffee and a fresh croissant. He falls deeply in love.

Showtime. The lights dim, the assistant stage manager taps his shoulder and Frank walks quietly onto the dark stage. He lies down in the bed; the opening scene is a funeral, Frank’s funeral. He folds his hands across his chest and closes his eyes as the lighting operator suffuses the scene with a warm glow. The band starts the funeral music and the whole cast slowly enters in twos and threes to pay their respects to the Dead Clown, all sixty of them touching Frank, weeping, whispering prayers in Russian and French and Portuguese.

The feel of the bed takes Frank back to his mother’s house, back to that morning nine weeks and six days ago. He imagines what she might have felt, right before she died, lying in her bed. The fear and relief and pain of death. The loneliness. Dying alone, under hot lights on a soft bed…

…two large Ukrainian acrobats spin the bed, hook on four metal ropes and give the riggers a cue. The band plays, Frank rides the bed up 30 feet in the air and the show begins.