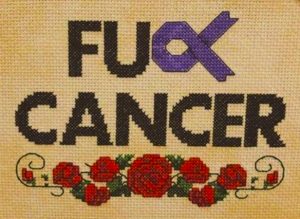 Willa Woods is hugging the porcelain goddess. Her stomach has long since run out of food to disgorge and her abdominal muscles ache from heaving.

“Better than sit-ups,” she says to herself, and it’s true; her abs haven’t been this strong since a brief career as a trapeze artist ended with a nasty fall. That accident was in the exact same theater where she should be right now, setting light cues and tweaking clown acts for her friend Hetty de Brun’s memorial instead of standing in her bathrobe puking.

She likes the way the “ck” sound echoes off the lime green tiles.

Another echo, a hollow cough and back to heaving. Blessedly short heaving.

Willa closes the lid and sits on the toilet. She’s very still for a few minutes. Her stomach stays calm. She takes a deep breath and doesn’t cough. She sighs and whispers, “Fuck chemo.”

Willa starts to stand up but her oversized purple bathrobe gets caught under her right heel and she sits back hard. The top of the cheap plastic toilet cover pops down from her weight and then, when she manages to stand, pops back up. Willa looks in the mirror: A pink bowling ball with blue eyes, a pert nose and too many lines looks back. “Uncle Fester does cancer. Complete with toilet lid schtick. I’m just that good.”

Back when Willa was a clown, before she took to the air on a trapeze and then, after the fall, took off for Washington State to get an MFA in stage directing, she wore her long hair braided around a wire clothes hanger twisted into matching blond horns. She loved that look – Pippi Longstocking meets Brunhilda. Now she’s got a natural bald pate, which is funny on some clowns but just makes her look old and sick and shriveled.

Willa washes out her mouth. She slaps water on her face. “Cut the crap, Woods. You got a show to direct. All this self-indulgent, nostalgic bullshit is going to make you late.”

She focuses on her plan: start by getting dressed. Then grab the show notes, car keys and a diet Dr. Pepper. Don’t forget the rainbow knit cap – cold heads make for cranky directors. Then make it down the stairs and find the car. After that it’s smooth sailing, just a short drive to the theater and, thanks to that beautiful blue handicapped tag, easy parking.

Willa pulls the robe around her and walks slowly down the hall to her bedroom, one hand on the wall for balance. The house is too quiet. She would love some company right now, maybe even some help getting dressed. But her roommate Frank is at the theater.

Frank’s better off at the theater – he’s not great with bodily fluids. He’s not so good with sick bodies either. But he’s damn good at putting on a show. When Willa fell off that trapeze 20 years ago, he put together a benefit in two weeks flat. The highlight of the show was an acrobatic trick she did with Frank, standing on his hands, high above his head, exactly where her trapeze had hung. Both her arms were in casts and slivers of the theater’s hardwood floor were lodged in her gums. She smiled and waved at 300 clapping, screaming, crying friends. All the love she absorbed in that moment, even more than the money from the show, got her through the hard times – the rehab and the pain and boredom and doubt and wondering endlessly if her hands had really slipped off the trapeze bar or if she had let go on purpose.

Willa sits on her disheveled bed to catch her breath. She really wants Jackie Armarillo. Jackie is good with bodies and bodily fluids. Really good. Really, really good. Jackie would walk in and wave her long blond hair around. She would even let Willa run her hands through the yellow mane pretending it’s her own. Jackie would have Willa dressed and smiling in no time, maybe even feeling like a woman again.

But Jackie isn’t here. She’s rehearsing at the theater with Frank.

Jackie has been here a lot. All of Willa’s friends have been here, taking care of her, loving her. Willa has always needed care, especially when the demons took over her brain, and, somehow, she’s always had friends who care enough to do the dirty work of saving her from herself. And she’s always made sure, in the good times, to pour her love and time and expertise into her friends, to be useful, always useful. It’s been a pretty good life, if you don’t mind the ups and downs, but now it’s different. Now she’s dying. Now she feels the love behind the caring and it shocks her. It almost makes her love herself but she doesn’t need to – that job’s been outsourced now.

“Good god, Woods. Are you gonna wallow in your own shit or go make a show for Hetty? No one’s gonna love you for long if you sit on your ass all day.”

Willa starts to put on her director’s costume – black jeans, black turtleneck and a purple vest. It’s slow going. She could sure use Jackie right now. She knows she’s becoming too dependent on Jackie, too used to the younger woman’s fawning attention and nervous laughter. The other day, when Willa felt herself sliding, just a little, into the dark hole that used to swallow her up, Jackie stripped down to her still luscious body and sang Madonna’s Crazy for You while dirty dancing with the vacuum cleaner. Sexy, funny and when Jackie was done, the floor was spotless. What’s not to love?

Just thinking about Jackie and the Dyson cordless gives Willa enough energy to finish getting dressed and walk down the stairs.

Frank Singer is sitting in the aisle seat in the last row of the bleachers in Theatre Artaud, formerly an American Can Company factory. The rehearsal has stalled, again, this time because of the stage lights. Some kind of circuiting problem. It looks like Frank and his clown partner Tina Edgars will have to do their cross-gender clown/dance act without a technical rehearsal. A good day just gets better.

Frank opens up the program.

“Hetty de Brun, a major figure in American circus, was one of the first female clowns ever to matriculate from the famed Ringling Bros. and Barnum & Bailey Clown College…”

“Matriculate? From Clown College? Give me a break.” Frank folds the program into a paper airplane and sails it toward the stage. He was too busy to write Hetty’s obituary and now it’s too late to make changes. You can’t capture Hetty in a biography; you need better tools. Hetty was not the sum total of where she’s worked, unlike many other performers. And Hetty De Braun wasn’t a “major figure” in any conventional sense and she didn’t “matriculate” anywhere. She strode, shimmied, shocked, teased, abetted, cajoled, comforted, corrupted and fiercely loved a whole generation of circus performers.

Frank closes his eyes, letting the tears seep through his lashes. Hetty is there, behind his lids, sitting at the bottom of the stairs that led up to her office, a tube in her nose and an oxygen machine whirring beside her. She’s in an abandoned old high school where she’d built her own school, her answer to Clown College. She’s trying to get enough air into her ruined lungs to start the long climb up the stairs. And she’s laughing. A steady stream of students stop by to talk, to get teased, to get challenged and, for the reprobate few, to get the famous de Brun scowl.

Frank opens his eyes and blinks to clear his vision. Performers start to trickle out onto the stage as they wait for the lights to get fixed. They stretch and rehearse bits of their acts. Frank doesn’t join them.

Looking down from the bleachers, they seem strange to him – a small woman drops into the splits and pulls her back leg up to her head; a blond, well-muscled guy holds a smaller, sleek Asian man over his head in a handstand; a couple start to tango slowly across the stage and then, without missing a step, dance together up a vertical pole; a young woman, one of the clowns, juggles three machetes over her bulging pregnant belly.

Strange, daring, exotic - these are Frank’s friends, his colleagues, his family, and this is their work, their day-to-day.

He feels far from them.

“Stage to black!” Willa Woods is sitting in the front row, “god mic” in hand. The work lights go off and a moment later, the stage lights are back on. Everyone claps. Frank claps. Willa is sounding like her old self as she calls out lighting cues and streamlines transitions with a clown alley of eight, count them eight!, funny women. If this weren’t a memorial show, and if the director didn’t have cancer and if his mother hadn’t said, as he’d left her house an hour ago, “You didn’t let Berit find the morphine stash, did you?” Frank would be a happy man.

All this death and dying makes it hard to be happy.

Willa says, “Quiet in the house! Clear the stage! We’re running an aerial act.” She sits back down. “Lights to black! Go band!”