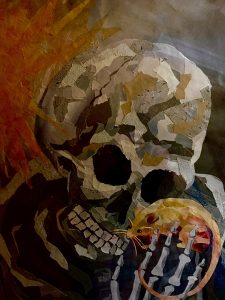 Back in her office, Dr. Sands says, “We only have a few more minutes to…”

Willa interrupts, “OK. Let me put this a different way. Breast cancer is a glamorous disease. All the ribbons and races, lots of services and support for us brave women fighting the good fight.” The doctor sits quietly, listening. She gives nothing away.

“On the other hand, no one wants to hear about bipolar disorder and suicidal depression. There are no ribbons for brain disease, no Run for the Crazy People, no money. And there sure as hell isn’t any glamour in visiting a friend in a locked psych ward, like Frank used to do. He would sit with me in the hallway while I cocooned in an old blanket talking endlessly about my suicide plans. No fun.”

Dr. Sands inhales but then thinks better of saying anything.

“Frank didn’t want to come today. He hates this stuff. But he’s loyal and he knows I’ll do anything to keep from losing my marbles again.”

Dr. Sands sits up a little straighter and, in her flat, professional voice says, “There is only one treatment available now that I believe has a high probability of working for the type of cancer you have. If you refuse that treatment, you have a good chance of dying in the next six months. And it won’t be an easy death.”

Willa decides that this is the doc’s last salvo and that now she’s ready to let go of her belief that she must save lives at all costs. That is, the doctor is ready to do what Willa wants her to do. “I’ll take six months, Doc. If we work together, I bet we can make it a year. Or a couple of years. Or maybe even a decade.” Willa leans in and lights up her best headshot smile. “Cancer is easy compared to depression.”

Dr. Sands sits back into her chair and her voice is looser, more human, “There are two new treatments just coming out that might help. They wouldn’t require you to go off your current meds. I don’t know much about them yet but I’m presenting your case at rounds on Wednesday so I can get my colleagues’ input.”

“Great. Thanks. See, we’re good together.”

“I’m not sure what for. Look, this is new to me. When I was a student I hated the psych wards. Don’t get me wrong, I didn’t hate the people--”

“I’m not a big fan of psych wards, either.” Willa walks to the door, then turns back. “We’re a good team, Dr. Sands. We’ll get through this together or die trying.” Willa lights up the room with her smile; Courtney Sands almost laughs.

Frank Singer walks east from the North Berkeley BART station. He rounds the corner onto his mother’s street and is relieved that there were no lights flashing, no neighbors gawking, no EMTs. He’s strolling in sunny suburbia, or at least the closest thing Berkeley has to suburbia. Last night’s rain has given the air a crisp, sweet taste. Every house is skirted with bright white calla lilies, each sporting a phallic yellow spadix.

As Frank is about to walk up the three cement stairs to his mother’s front door, Mick Jagger starts singing in his pocket. Frank flips open his phone.

“Bonjour. Am I speaking with Frank Singer?”

“Apparently you were not able to call me yesterday as we agreed. Since we are in an emergency, we will ignore your mistake. Will you be able to join Corteo in Madrid?”

“Ah, thanks. Merci. Actually, I’m still working on that, getting my affairs in order, like you said.”

“I see. So you will be able to arrive in Madrid next week?”

“Maybe not next week. My affairs are a bit out of order at the moment, you know what I mean, so it might take a little longer, maybe a month or two. Realistically, you know.”

“Oh. Ce n'est pas bien. We will need to find someone else.”

“Can you maybe find someone to fill in for just a few months? I’m sure I can order my affairs by, let’s say, new years at the latest.”

“This is possible, perhaps. You need to know that we cannot guarantee a contract for you. If the replacement that we find now is of high quality and chooses to stay, you will be, how do they say, merde de chance.”

Frank hangs up, holds the phone in front of his face and screams, “I’m already shit out of luck, you condescending Québécois!”

The curtain on the front window of the house next door pulls back and Frank sees the nose and eyes of the man who called 911 last night. Frank smiles and waves. The curtain falls.

Frank climbs the stairs and lets himself in, calling out “It’s me, Frank” as he opens the door. He walks right into Berit. “Sorry. Didn’t know you were here.” Berit is nearly as tall as Frank with a Viking’s build and warm green eyes.

“Good, good.” She gives him a hug. “Now we can get started.” Berit walks to the back of the house shouting, “Magda, Frank is here! I will come help you out of the bed.” Frank stumbles into the living room, trying to figure out if Berit is very early for tonight’s shift or still here from last night’s. And why?

The living room usually holds five bookcases, a few dozen paintings on the walls, all original Magda Singers and a Naugahyde-covered ergonomic easy chair. Now there are four black wooden chairs in a semicircle facing the big chair. A hospice social worker, Nan Stein, stands up from one of the chairs to shake Frank’s hand. She’s short, no more than five feet, with a salt and pepper bob and the calm demeanor of Judy Dench.

“I heard about last night. You did a good job keeping your mother out of the hospital; she really appreciates all that you do for her.”

Frank is still holding the social worker’s hand, waiting for the bad news he knows is coming.

“Berit agreed to stay today to make sure that your mother has recovered from her trauma. She called me this morning and we decided that it is time to take stock of where we are and plan for palliation.”

The doorbell, which is loud enough to wake the dead, startles both of them. Nan Stein recovers first, “Oh, good. It’s Carol from Compassion and Choices. I asked her to join us, too, since she has some expertise and experience we might need.” The social worker goes to the door as Berit comes in from the back of the house saying, “She’ll be here in a minute. I’ll get some water for everyone.” Berit turns to her left, into the kitchen, and reveals Magda Singer inching her way forward with her walker.

“Frank, dear, you saved my life. Thank you, thank you.”

Magda can see herself reflected on her son’s face. She looks like death. She can feel her eyes sinking into their sockets and her lips pulling back from her teeth. She knows her hair is a mess. She has always gotten herself together for Frank’s visits, even though, after Bobby died and she moved to Berkeley and became a feminist, she’d promised herself she’d never get primped up for a man again. She wonders if “primped” is a word and if it is, if it’s the right word for what you do when your son visits.

“Let me help you.” Frank takes his mother’s bony arm and kisses her on the cheek. It’s baby soft.

“Oh, Nan is here!” Magda uses Frank’s arm to pivot around to Nan Stein, who hugs her.

“Frank, I love this woman. Did I tell you what she did the first time she came over?”

Frank closes up the walker and stashes it behind Magda’s chair. “Yes, many times.”

“She walked right past me into the living room and started talking about my paintings. Great taste in art and a wonderful conversationalist.” Nan says, “Your mother is an amazing artist” and helps Magda slowly lower herself down into the ergonomic easy chair.

“Oh, shit that hurts. Frank, could you get me a pillow off the bed; I got a huge bruise on my ass from last night.”

Once Magda is settled in and Berit has given them all water, Nan starts the meeting, “Thank you for coming over, Carol, and for staying Berit. I would like...”

“Nan, we need to talk about the future. Frank, I’ve stopped eating and drinking.”

Frank just stares. His mind goes blank. Before the silence goes from awkward to excruciating, Nan says, “Frank, this must bring up some feelings for you. Is there anything you want to say to your mother?”

Frank’s mind searches for the appropriate question or comment or argument or phrase or quote for a son to say when his mother has decided to starve herself to death. Berit adjusts Magda’s pillow and Nan waits patiently. Carol from Compassion and Choices, who has been perched, straight back, in the chair nearest the door, starts to unzip the gray gym bag resting on her knees.

Magda says, “Don’t bother taking out your poisons, Carol. I’ve made up my mind. I’m going to die my way.” Carol looks sour and re-zips the bag. Magda turns back to the social worker, “Nan, what we do need to talk about is the future of my paintings. I can’t stand the thought of them ending up in a dumpster.”

“OK, Magda, let’s start there. Frank, you are the executor – how are you planning to manage Magda’s artwork after her death?”

Magda, still talking to Nan, interrupts. “I’ve told Frank that I want my brushes and paints and other tools to go to women artists and any of my paintings that don’t sell to get donated to women’s shelters and prisons and anywhere else that they will be appreciated.”

Magda hears her own voice and she’s surprised. She sounds like herself, her old self, her anti-war leader self, her strong single mom self, her late-in-life PhD self, her feminist writer self. And she feels like herself, too. She feels strong, strong like she felt the moment she decided to die on her own terms.

Somewhere along the way she got sick, her body got weak and the world started to scare the shit out of her. She’s been living scared but now she’s back, just in time to make her mark, leave a legacy before she dies. Her art will live on, it will go out into the world the way she couldn’t in these last too many years. And maybe this moment, her moment of strength, of taking the reins and making her death a peaceful choice, not the medical debacle it is for so many people, maybe this is her last gift to Frank.