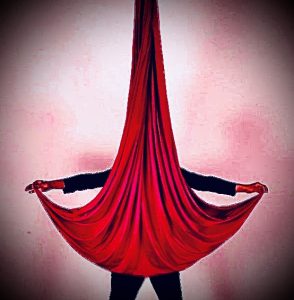 In the darkness, the rhythm section starts a slow, hypnotic version of Duke Ellington’s Caravan and a shaft of light appears center stage. As the trumpet comes in, two long red silks, aerial tissu, unfurl from the flies and hang in the shaft of light. Virginia Barre walks to the tissu and pulls the two strands apart. She stands center stage, a young woman with dark brown skin wearing a blue ballroom gown and holding a red silk in each hand. In one smooth move, Virginia pulls herself upside down and the gown falls away revealing a sparkling silver leotard and matching knee-high soft leather boots. The drums take the band to a faster tempo as Virginia climbs, wraps herself in the silk fabric and tumbles down. Up and down, over and over, her body and the fabric making pictures - now a sail, now a hammock, now angel wings - always languid, always graceful, seemingly effortless.

The music ends and there is applause and a few shouts of “Beautiful!” Frank hasn’t seen Virginia Barre perform since she was a gangly teen apprentice in an outdoor circus led by Hetty de Brun. Willa Woods took her under her wing and soon Virginia was touring with UniverSoul Circus out of Atlanta and then off to Europe for the last few years.

Virginia stands in the dark, holding the strong red silks in her hands, soaking up the other performers’ applause. She’s home again, back in the Bay, but she’s now a pro. That’s what touring will do for you; get you respect back home. Europe was good to her – she had friends, fans and even a touch of fame. From a young age, her mother had told her stories of Josephine Baker and Paul Robeson and all the jazz geniuses who found a home in Paris. Like them, she discovered that she could walk with a different dignity in Europe, that her brown skin and American accent made her, in other’s eyes, a child of those the great artists, albeit a circus child. But even before she heard that Hetty’s lungs were giving out, the endless travel was wearing thin. She missed the Bay, missed the complications of family and craved growing roots in one place again. She was ready to go back to the community that raised her after her mother died. She was ready to come home, no longer a child, to take her place in her circus family.

Willa walks on stage clapping, “Nice, nice. Can we have work lights please?” She hugs Virginia, whispers a few notes in her ear then calls for the riggers to strike the tissu. “Let’s work the Dead & Alive gag. Jackie and Isabel to the stage please!”

Jackie Armarillo cartwheels on, fakes a trip and lands lying on her back. Isabel Sanchez, a short, thin dancer-turned-clown with curly black hair, runs up to Jackie. She lifts Jackie’s left arm and holds the wrist to her ear.

Isabel steps back and looks to where the audience will be in a few hours – she’s dead! – then looks back at Jackie to see that her arm is still in the air.

She lowers the right arm and, of course, the left one comes up.

Surprise, followed by an idea. Isabel holds down the right arm while lowering the left! Jackie’s left foot comes up at the same speed.

Frank has been teaching and performing Dead & Alive for years – eventually Isabel will straddle Jackie, with her back side facing Jackie’s head, and push both of Jackie’s legs down; Jackie will sit up, do a sly take to the audience and bite Isabel’s ass, sending her into a dive roll followed by a chase off stage. It’s funny and follows the formula 51% comedy/49% tragedy, a clown act about death.

Frank checks his watch. It’s way too late to call Angelique at Cirque du Soleil. He should have called her to say, “Let some other middle-aged clown make a fortune while getting standing ovations in all the great cities of Europe.” Or he could have said, “Call me back after my mom is dead and my roommate is in remission.” But he didn’t call because he wants to say, “I’ll do it! Please get me out of here!”

Going on tour, hitting the road, putting as many miles as possible between him and his life – this is Frank’s go-to solution for every problem, personal or professional. But his people, the people he loves, his family, they need him now. It’s time to stay home and be a mensch, instead of running off on the next big adventure.