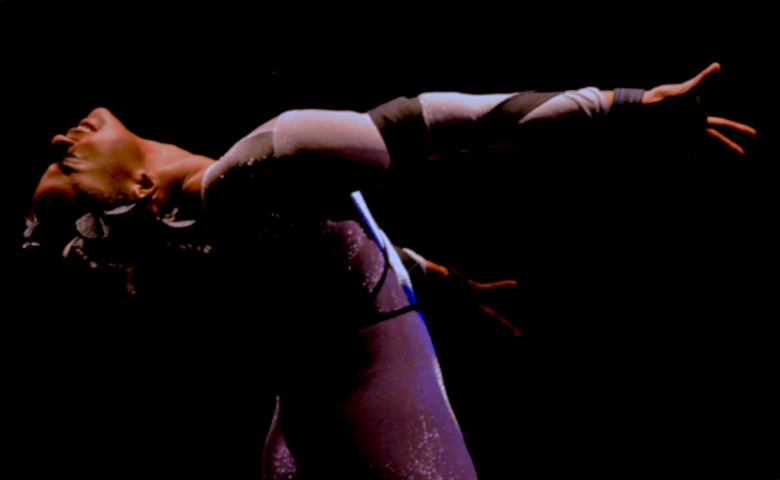 The audience answers, “L’chiam,” the rabbi takes her chicken back to their seat and the band starts into a slow blues. A trapeze is lowered and a young woman pulls herself up on the bar. She does Willa’s very first aerial routine, learned from a grainy VHS tape, featuring a thousand-watt smile after every trick. Willa’s niece follows with a solo dance that starts light, gets darker and ends with a series of moves that look like figures from the right-hand panel of a Hieronymus Bosch triptych.

The band kicks into an off-kilter re-write of “Thunder and Blazing,” cuing Act One of a clown eulogy Frank wrote for Willa. Jackie enters on her stilts wearing Willa’s old Ringling red fright wig, playing Willa the Circus Clown dreaming of a parade around Madison Square Garden. She beams at the audience, dances to the music, throws huge legs into the air, drops into the longest splits you’ll ever see and then rolls back up to standing. Some more dancing and then she falls, all eight feet of her hitting the stage so suddenly the audience gasps. Blackout.

No one claps. Too many of them lived through Willa’s real-life falls.

When the lights come back up, the stage is bare except for a microphone. An actor friend of Willa’s, a short man in his 50s with spiky white hair and a sizable paunch, steps to the mic. His monologue, in rhymed couplets, is full of inside jokes. He avoids painful memories and the audience rewards him for giving their hearts a break. He exits in the applause and Zip Abrams enters, Willa’s red wig askew on her head, her white hair poking out from under. This is Act Two of the clown eulogy, Willa at her craziest. Frank watches from the wings as Zip stands center stage, the audience silent in anticipation.

Zip stands there a little too long and Frank realizes she’s forgotten her lines. Zip steals a look at the band, looks back at the audience, inhales and says, “Am I talking too loud? I’ll whisper. Loudly. So the back row can hear.” Her voice is a monotone, old lines given without emphasis or energy. The audience claps – they know Zip’s Crazy Lady routine and, hearing the delivery flattened out, they make a connection with madness. Frank winces, realizing that the scene he’d carefully written and then rehearsed with Zip will never happen.

Hearing the audience applaud, Zip perks up and improvises, part Lady Macbeth, part her Crazy Lady act — “Oh, wait, I just remembered what I wanted to tell you…Wait, I forgot again. OK, I remembered again…” — with an occasional line from Frank’s scene thrown in at random. The audience roars as Zip leaves the stage, assuming the surreal scene was intentional. The band plays another song and the house light come up. A much needed break.

After intermission, an ode to Willa, more music and a few more circus acts. Frank comes back out holding three white plastic juggling clubs. Other jugglers enter one at a time, each holding a set of clubs, as the band segues into a mid-tempo waltz. The jugglers make a semi-circle facing the audience with Frank in the middle, facing back at them. The crowd claps in anticipation of The Big Juggle, a Willa Woods’ favorite originally made famous by the Pickle Family Circus twenty-five years ago.

Frank raises his clubs in the ready position but there’s a gap in the arc of jugglers where Zip should be. He looks off stage, doesn’t see her and starts juggling. A pass with each person on down the line and back, two throws to himself and a final, high throw as Frank spins 180 degrees and then goes down on one knee facing the audience. Ten juggling clubs slap into ten palms as the band hits the final note. Ta da!

The jugglers clear the stage and the rhythm section lays down a loose, hypnotic groove. The lights go soft and blue. When their eyes adjust, the audience sees a body balled up near the ceiling. Virginia Barre stretches a leg and then an arm, cuing the lights to come up just a little brighter. She’s wearing the red clown wig but on her it looks stylish. Act III of Willa’s eulogy.

Virginia is in a simple white unitard, languidly climbing and tumbling down a white tissu, but this time the pictures are different – the fabric restrains her and then she’s falling; a grasping hand reaches up towards the heavens then the tissu cradles her body, too weak to climb. This is Willa’s fight with chemo, her last dance with cancer. She finds the strength to climb back to the ceiling, back to where she started, her body balled. The lights get dim again and the whole cast quietly walks on stage, looking up. Only the piano plays, softly, and Virginia slowly, so slowly, twists and turns down the fabric until she gently lands in Frank’s arms. A pause.

The lights go out.

The theater is silent.