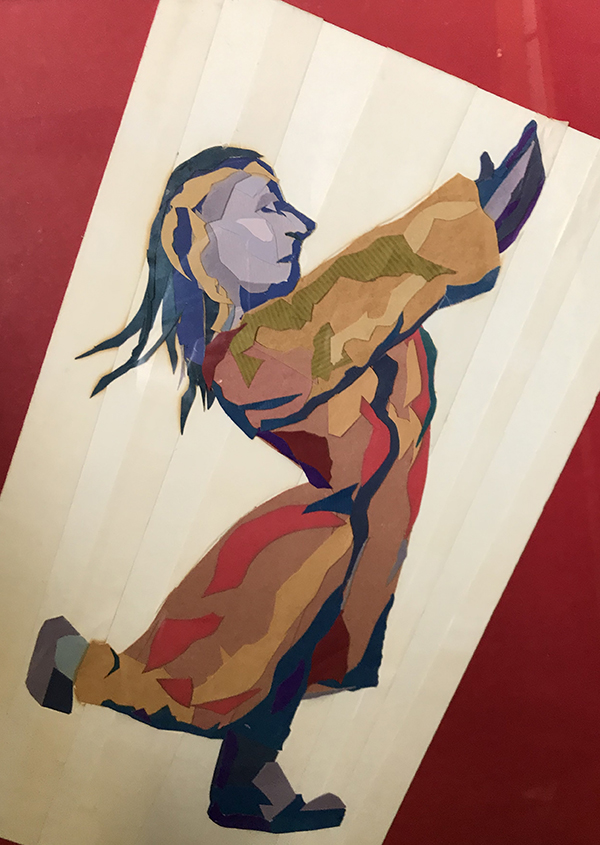 January rolls into February and Corteo rolls into Amsterdam. The performers get a week off as the tent crew sets up the grand chapiteau in the parking lot of the Johan Cruijff football stadium.

Too snowy to bicycle through the Dutch city, Frank Singer spends his time in history museums, Indonesian restaurants and jazz clubs. On Friday night he goes to services at the first temple to re-open after the war and, for his last night before going back to work, Frank treats himself to a meal of the local favorite gerookte paling at Der Blauwe Holländer – The Blue Dutchman. Unfortunately the smoked eel is tainted so he pukes his guts out for the next 14 hours and barely makes it through the dress rehearsal.

Valentine’s Day finds Jackie holding Willa’s right hand while an IV drips saline solution into the basilic vein of her left arm. Willa had gotten too dehydrated to get out of bed and called Jackie to take her to the out-patient clinic. After seven hours, Willa is plenty hydrated but her vitals are so bad that they take her directly to the emergency room.

Sometime around midnight, the ER doc gets her stabilized and admits her to the main hospital.

Early the next morning, Jackie is asleep in the bedside chair when she’s startled awake by a gang of residents on rounds staring at Willa and listening to a doctor talk them through the examination. Willa is too drugged up to care but Jackie is livid. “If you want us to perform for an audience, you better fucking pay us.”

The rest of the day is a smorgasbord of tests, meds and boredom.

Around four, Zip spells Jackie, who goes home for a shower and change of clothes.

Virginia Barre drops by after her workout with some Vietnamese take-out.

Dr. Sands comes down from her office for a quick chat with the hospitalist. They decide to keep Willa another night; Jackie and Zip decide there is no need to call Frank. Yet.

In the middle of the second night, Jackie wakes up from a deep sleep and tries to figure out where she is – blinking lights, soft whirring sounds, that smell and the pressure of the wooden arm of the chair against her ribs. She stares at the bed, her eyes slowly adjusting to the dark. Willa’s gotten so thin she hardly makes a bump in the thin hospital sheets. Another moment staring and Jackie realizes that Willa isn’t making any bump in the sheets because Willa isn’t in the bed.

Jackie runs into the hallway calling Willa’s name. A night nurse almost tackles her in the hall. “People are sleeping! Sick people! What do you think you’re doing?”

The nurse, a slight young man with black hair and a goatee, makes shushing noises as he guides Jackie back to the room. “Ms. Woods did not die and she did not leave the unit. Let’s take a look in her room, shall we?”

Jackie yanks open the door of room 218 and the neon light from the hallway spills onto Willa Woods’ bare behind peeking out from her pale blue hospital gown. “Damn, Willa, you freaked me the fuck out!”

Willa turns around and stares at Jackie with a serene, distant look. “Well, Lady Farthington is waiting for us and the sooner we get to Australia, the better it will be for everyone.” She smiles at the nurse, “Isn’t that right, Nigel?”

“Of course it is. The ship is sailing smoothly now, thank goodness, and I’ve made my offering to the porcelain goddess.” The nurse looks puzzled so Willa adds, “I’ve been ‘feeding the fishes,’ Nigel, to use a euphemism you sailors might enjoy.”

“Right, right, of course, Ms. Woods. ‘Feeding the fishes.’ Now just lie down, I’ll clean up the blood, get the IV back in and the monitors back on. You’ll be fine. If you needed to use the bathroom, you just had to push this button and I’d’ve taken you.”

As the nurse gets his patient hooked up and settled down, Jackie slumps back into the chair and closes her eyes. She doesn’t sleep, too much adrenaline is pumping through her body at the thought of losing Willa, even if Willa has lost her marbles again.