It’s New Years Eve and Willa Woods is happily asleep by 9:30pm. Even the cherry bombs and gunshots that will blast the Mission at midnight won’t wake her. 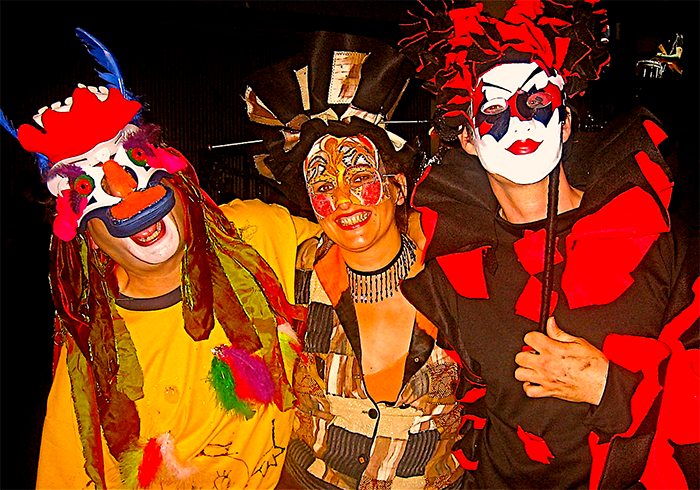 At the San Francisco Armory, Virginia Barre steps off of a dusty I-beam into the bucket of a rented cherry picker and toggles herself down to the ground. She tugs on the red tissu that she’s just rigged. It’s solid. She uses the silk to pull herself up out of the bucket and gracefully step onto the cement floor. In a few hours, Virginia will swap her rigger’s garb – faded blue coveralls, work boots, gloves and a ratty black beanie – for her blue gown, silver leotard and lots of spray-on glitter. She’ll pirouette out of a line of samba dancers, pull herself up onto the red silks and climb thirty feet above the guests at Carnavale San Francisco’s party. As the countdown to midnight hits one minute, she’ll wrap herself in the tissu, a special weave that will allow her to roll down and stop, at the stroke of midnight, hanging from her feet with her head inches off floor.

On the USS Hornet across the Bay in Alameda, Zip Abrams’s right calf is getting rubbed raw by her stilt strap. She’s been walking non-stop since 10pm, unable to get through the crowd to take a break. Luckily for Zip, even with hundreds of feet dancing on its hanger deck, the 27,000-ton ship has barely swayed in the water. But now it’s time to sit down. The band suddenly stops, mid-song, and an old man in a World War Two uniform walks up to a microphone. “Five minutes to go, folks, before this Sea, Air and Space Museum sees another new year!” The crowd surges forward, giving Zip a clear path to an Airstream trailer marked “Apollo 11 Mobile Quarantine Facility,” her dressing room for the evening. She lowers herself down into Buzz Aldrin’s seat and pulls off her stilts. Zip is done working for the year.

Berit Aagbersdotter sips aquavit out of a crystal trumpet flute while her wife, Rachel Schwartz, pours herself a second glass of Prosecco. Rachel rejoins Berit on the couch and says, “Kathy Griffin’s mouth is really starting to bug me. On the other hand, if Anderson Cooper were a woman, I’d be all over him…her.” Berit says, “You can have your Andrea Cooper; I will take Liv Ullmann any day. There is a real Norwegian woman.” 10, 9, 8… The ball hits bottom, they kiss and Berit asks, “Do you think Aleksander is coming home tonight?”

Aleksander Aagbergsdotter-Schwartz, “AKA” to his friends, waits until midnight to walk into the 924 Gilman Club where Fetal Alcohol Syndrome is already shredding the smoky air. A spray painted sign over the small stage reads “Yüng Pünx New Year.” Aleksander starts dancing, screaming the lyrics into the onslaught of decibels. He feels his anger pouring over the crowd and melting into the speakers. He’s home.

The Nasty Pigeon Burlesque is doing a late show under the Big Top nestled in a tiny park in downtown Oakland. The band is grinding as women and men in corsets and panties twirl ribbons, throw handsprings, climb poles and swing on trapezes. A couple of clowns dressed as skeletons do a bizarre, off-tempo version of "Dead & Alive." The patrons, wearing only slightly more clothes than the performers, are guzzling champagne and hooting their appreciation of a year’s worth of toned, tattooed flesh.

The acrobats and dancers exit and Jackie Armarillo rides on pedaling a six-foot tall unicycle. She does a circuit of the stage and then heads straight towards the audience at full speed, stopping just inches from crashing into the front row. Champagne spills, hoots turn to screams. Jackie laughs, regains her balance and rides around the stage again.

The music stops and a small woman in a man’s tuxedo enters carrying an instrument bigger than she is – Isabel Sanchez with a baritone saxophone. She starts playing the classic stripper song – Bwaaa na na naaa, Bwaaa na na naaaa. Jackie does a strip tease, still riding the unicycle, sliding items of clothing skillfully over her big shoes and oversized blond beehive wig. The crowd is back to hooting now with regular bursts of laughter. Down to a G-string and pasties, Jackie jumps off the unicycle and Isabel goes into the can-can part of the song – Bomp chaka, bomp chaka. The rest of the band joins in. Jackie does a few kicks, her pink sequined flap shoes flying high over her head, and then she slides her hand slowly up the shaft of the unicycle. The last part of the dance, a duet for nearly naked clown and a long, tall unicycle, is so raunchy that it makes her moves with Willa’s Dyson look like an 18th century minuet.

Frank Singer lies on his hotel bed outside of Paris doing the International Herald Tribune crossword puzzle. He’d left the post-show party well before the champagne and kissing.

The badass Polish foot-juggler had hit the vodka even before she got out of costume and she was draped all over a Azerbaijani wire walker by the time Frank got to the cook tent. Helen, the Texas Fiddler, was at a computer in the corner, Skyping with her hubby back in the states.

15 down – Card game or a single diamond

Frank had put three thin slices of cake from the beautiful buffet on a small plate – chocolate, carrot, Linzer torte – and sat down at his usual table with his usual friends.

Yasha, an acrobatic “porter” and former Ukrainian arm-wrestling champion, was playing chess with a retired Polish tiger trainer, father of the foot-juggler. They stopped the game for a moment and toasted Frank, who, finding he didn’t have a drink, clinked his plate against their glasses and said, “L’Chaim.”

The table exploded in laughter and, after a dozen jokes that Frank didn’t understand, Yasha put his huge arm around Frank’s shoulders and said, “We are wondering if all Jews toast with cake or only Jewish clowns.” Frank smiled and held up his plate.

The moment the men went back to their chess game, Frank slipped away, out of the tent, out of the gate without even hearing the guard say, “Bonne année!” He walked back to town, to the hotel, homesick, suddenly lost in a circus 5000 miles from everyone he loves.