Why look you strange upon me? 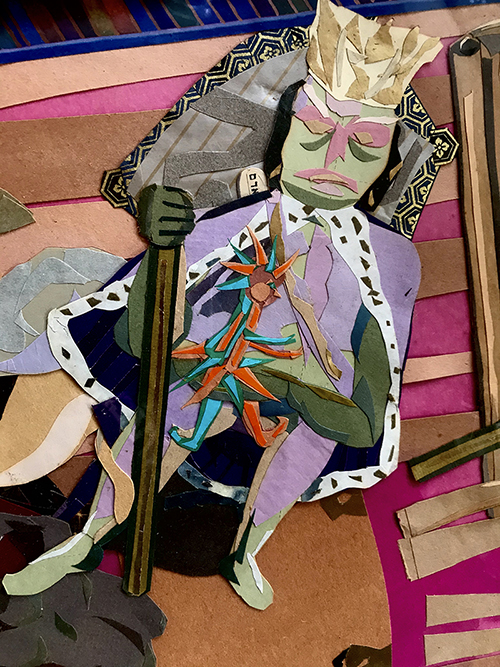 Kyle Dano is adjusting his tripod to get a picture of the fourteen women who make up the cast of “Comedy of Errors.” This single gender approach, according to the Women’s Shakespeare Festival’s publicist, “is the closest a modern theater can come to Shakespeare’s original staging” which was, of course, all male.

This is Kyle’s first photo shoot for a professional theater, although he’s documented every show at his school, Lowell High, for the last four years. Just being in a small room with over a dozen grown women is making him sweat. He’s trying to look like a pro but one of the actresses is seriously distracting him. Ziporrah Abrams, who’s playing the old man Egeon, is carefully stuffing socks in the crotch of her pantaloons.

Zip struts up to Kyle, leans in an inch from his left ear and whispers, “I’ll get the girls warmed up for you. Kind of like a fluff job.” She winks, makes a growling sound in her throat and turns to the cast, leaving the young man red, flustered and considering a career in nature photography.

“Listen up, Sisters of the Bard. The best shots come from action. So, everyone choose a line and when our baby-faced paparazzo here says formaggio, that’ll be our cue.”

Zip steps in front the other women and turns to face Kyle, who says, “Ok, ready. Say ‘cheese!’”

Fourteen actress hit poses and intone snippets of Shakespeare but all Kyle hears is Zip, slightly bent with age and her voice cracking, filling the room with the opening lines of her first big monologue:

“OK. Thank you, everyone. Um, I’ve got what I need with the full cast. We can do individual shots now.”

“We, uh, need to shoot on the seamless, ma’am. Over here.” He points to a huge roll of baby blue paper hanging near the wall and pulled out about four feet onto the floor, a neutral backdrop. “I guess I can shoot you first. What is your character name?”

Kyle gets his tripod set up in front of the seamless and checks his list. “E-gina? I’m sorry, I don’t…”

“’Why look you strange upon me? you know me well.’”

“Sorry, um, I don’t have a character by that name here and…”

“O, grief hath changed me since you saw me last,
And careful hours with time’s deformèd hand
Have written strange defeatures in my face.
But tell me yet, dost thou not know my voice?”

Zip grabs a chair and sits down. “Say something. Dost thou not know my voice? Go on, say something.” In the silence Zip starts to chant the intro to Madonna’s Human Nature over and over – “Express yourself, don’t repress yourself” – while slowly opening her legs and running her hands along her thighs like the men’s hands in the infamous music video. “Express yourself!”

Kyle Dano grabs his camera, snaps shut his tripod and races out the door, leaving his shot list, the seamless and a new telephoto lens behind.

Zip watches him go. She’s confused. They were having fun, goofing off with Shakespeare, playing around like she used to play with her younger brother. Why did what’s-his-name leave? She feels a hand on her shoulder and looks up at an oddly familiar woman in makeup, a red wig and a long dress. “Zip, you scared off our photographer. What the fuck?”

“Ha ha. I’m not playing, Zip. Kyle is just a kid. We need these shots and we can’t afford to hire a pro. I’m going to try to get him back and you better make yourself scarce.”

“Why? He likes me. We were having fun.” The other actress is already out the door.

Zip looks down at her hands, then at her brocade knees and finally her bow-topped shoes, trying to make sense of what just happened. The other women keep their distance, whispering in groups of two or three and checking themselves in the mirrors.