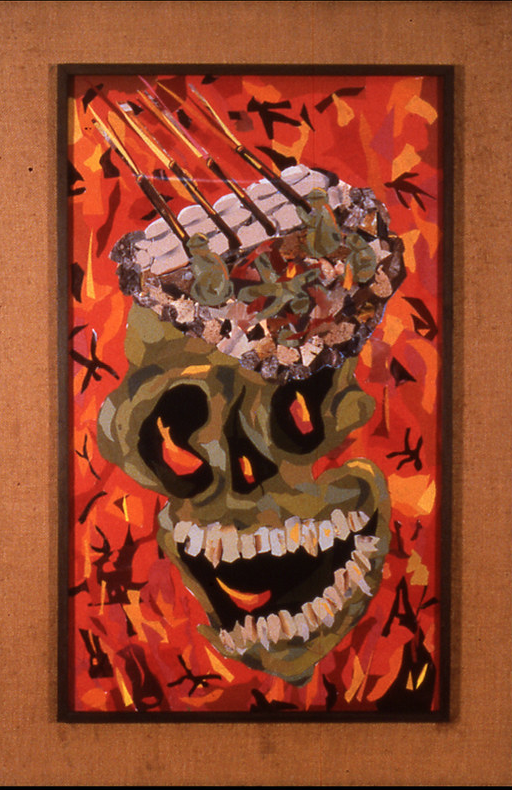 Rabbi Deborah Matz, a short woman with straight black hair and a patchwork tallis, is chanting the prayer for the dead. She stands under a large painting of a skull, an anti-war piece that was one of Magda’s favorites. The walls of Magda’s living room are now completely covered with paintings and a dozen sculptures are displayed on an end table, a stool and the bookshelves. Berit Aagbersdotter is near the door next to her punked out son Aleksander, Frank has Willa settled into the ergonomic Naugahyde easy chair with Jackie Amarillo right beside her. Virginia Barre is perched on a stool near the kitchen and Zip Abrams is next to the rabbi, eyes closed, mouthing the Hebrew. A few neighbors and old friends of the family fill the rest of the room.

The Jews in the room murmur “a-men” and the others quickly follow suit.

“That concludes the first part of this ceremony in memory of Magda Singer. When Frank asked me to preside at this ritual, he made it clear that Magda was adamantly secular and would not appreciate a traditional Jewish memorial. I told him that this gathering is half for the person who has died and half for those of us who remain. This first half was for us; a formal way to mourn together and bring to an end the period of improvised shiva that Frank and Berit have been observing. We will now move into the portion of the ceremony requested by Magda, although even this part will not be exactly to her specifications.”

The rabbi looks at Frank who stands up and clears his throat, “Yeah, right. My mom really wanted me to auction off her artwork as her memorial.” A light laugh goes around the room. “That’s not happening. But I would like each of you to choose a painting or a sculpture that attracts you in some way. Walk around the room, pick something out and then you can each explain why that particular piece caught your eye. That’s the part Magda would’ve loved, everyone talking about her art.”

Twenty minutes later, they are all back in their seats cradling their artwork. Zip has the giant skull painting – “It reminds me of demos in the ‘70s,” Berit has a mosaic menorah that she helped Magda make, and Berit’s son Aleksander has a clay sculpture of a woman who is mostly a screaming mouth. Frank explains it is part of a series his mom made right after his father’s death and that Magda created the lower jaw by grabbing the clay with her hand and pulling down hard. Aleksander fits his hand into the sculpture’s mouth and he smiles under his dyed black Mohawk.

The rabbi has wrapped up the ceremony and the guests have all left with their artistic memories of Magda. Frank is walking through his mother’s house, empty except for the furniture and leftover artwork.

Aleksander is riding shotgun, cradling the screaming woman sculpture, his hand still gripped in the mouth. “I can feel Magda through the clay, Mom. I can feel her. She was so mad and sad when she made this.” Berit keeps her eyes on the dark Berkeley streets, heading home. “It’s Magda’s gift to you, son, her angry sculpture, something you can grab when you want to punch your wall.” “Yeah. Someone that is more fucked up than me.” Berit winces but Aleksander laughs. “She was a weird old lady but she could put all her emotions into her art, deep into the clay. Pretty cool.” He holds the face up to his own, imitates the tortured mouth and screams. Berit slams on the breaks, “What are you…?” “Definitely more fucked up than me, Mom.” He smiles and Berit drives the rest of the way home in silence.

The giant skull painting takes up most of Virginia’s back seat, blocking her rear view. The shocking reds and oranges of the fire behind the gap-toothed skull excite and scare her; she’s only seen Vietnam War protests in black and white. What did women like Magda and Zip do in those days? What was it like to be part of a fierce, fiery movement? She starts to ask Zip, who’s in the passenger seat, but the older woman seems far away, silently stroking a spiraling clay abstract that Virginia chose for its smooth lines and grainy surface. “That sculpture is me, Zip. All graceful lines when I’m up in the air but rough around the edges the rest of the time.” Zip keeps stroking the sculpture.

Jackie drives over the Bay Bridge with Willa beside her. Willa is looking at her painting, wedged between the windshield and her lap. It is a five by five grid, all small portraits of women, some recognizable as famous political activists, with a mirror right in the middle. Willa says, “Magda called this ‘Lesbians, We Are Everywhere.’” “Magda was gay? Damn, if I’d’ve known that I would have done my vacuum cleaner dance for her before she died.” “No way, girl. That’s my dance.” They both laugh and then are quiet until they take the Cesar Chavez exit and Jackie says, “I like the mirror in the middle.”

Willa turns pedantic. “It’s the genius part, making the viewer part of the tribe, a de facto lesbian.” “When I looked at the mirror back at the house, it felt like my portrait was on the wall. That’s cool. My little blond self, sitting there with all these badass ladies. But it’s sad, too, because the picture of me disappeared as soon as I walked away.”