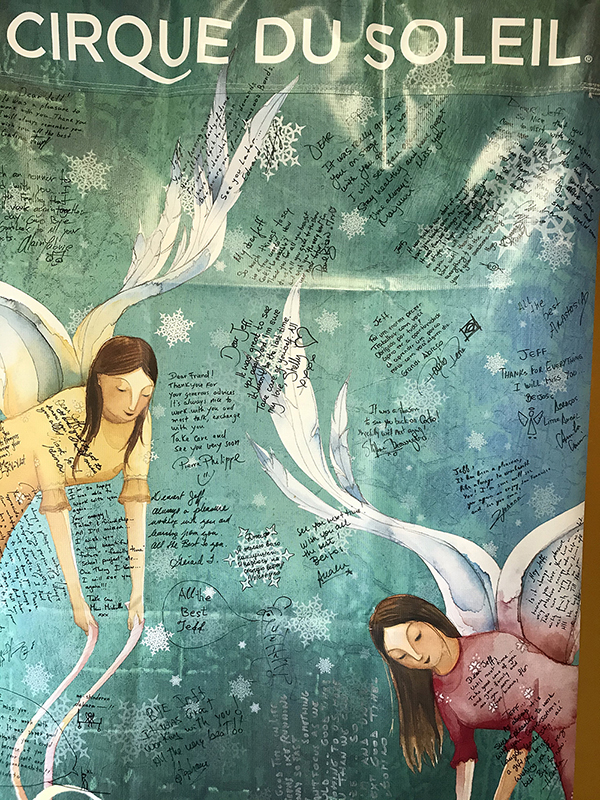 Frank finds his phone at the bottom of the duffel bag. He flips it open, ignoring the gauzy pink cloud at his feet.

“Bonjour. Am I speaking with Frank Singer?”

Relief washes over him – it isn’t his mother. It isn’t Berit. He isn’t an orphan.

“Mr. Frank Singer? Allo, my name is Angelique and I am calling from the Cirque du Soleil casting départment."

Someone from the casting office calling on a Sunday – this is serious. Cirque du Soleil operates under Canadian labor law that frowns on weekend work.

“Mr. Singer, will you be able to come to Madrid to play the lead rôle in Corteo?”

“I haven’t heard from you in three years and...never mind. When does this Madrid gig start?”

“Tomorrow. And the contract is for six months.”

The absurdity of leaving the next day for a six-month tour of Europe is still rattling around Frank’s brain when Angelique adds, “It is possible that we can wait for you to arrive until next week if you need to get your affairs in order.”

Frank is tempted to make a joke about “getting his affairs in order” but thinks better of it. “Next week? That’s still pretty quick. Let me think it over and call you back tomorrow.”

“If you can please call today before 17:00 Eastern time. This is an emergency and we need to make arrangements as soon as possible.”

Frank hangs up, holds the phone in front of his face and screams, “Fuuuuuuck yoooouuuuu!”

He is furious at Angelique for making a bad day worse. He hates Hetty de Brun for dying so that he has to get soaked on his way to directing her memorial, he hates Willa Woods for getting cancer and his mother for, for, for whatever she’s planning on doing to herself.

Then Frank laughs. Here he is standing in the rain on an abandoned street with a soggy pink dress at his feet cursing someone named Angel for offering to fly him to Europe and pay him good money to join a bunch of beautiful, young, healthy acrobats instead of staying home to helplessly watch his friends and family die. How could she?!?

The homeless guy yells, “Fuck you, too!” Frank says, “Sorry, man,” picks up the wet dress and walks on to the theater.