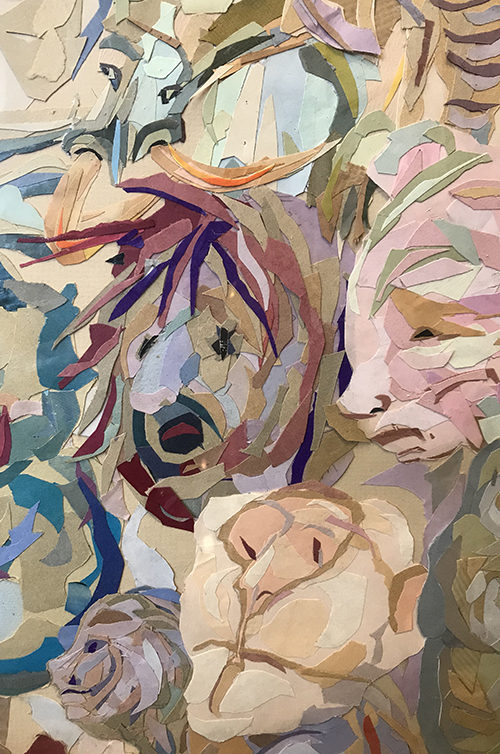 “I called her ten times, on the house phone and on her cell, and she didn’t answer!” Jackie Armarillo is in old grey sweatpants and a hoodie. Her voice is high and thin. “She didn’t answer!” Jackie tries to peek at Willa Woods through the small window in the hospital room door but half dozen people in scrubs are blocking her view of the bed. “I got over to her place and, you know I have a key, and she was lying in the middle of the hallway.” Jackie lets out a huge sob and Zip Abrams engulfs her with a hug. The door opens into them, they step back and a stern looking nurse in her 60s walks out into the hallway.

“Who has power of attorney for health care?” Frank, still dressed as the Neanderthal Party Clown, raises his hand. The nurse ignores the costume, “Ms. Woods has developed pneumonia and is very weak. Her DNR says we need your permission to continue to treat her.”

“Pneumonia? From the chemo?”

“We can stand here and talk causality or you can give permission for us to stabilize your friend. What’ll it be?”

“Of course, stabilize her. She’s going on a new chemo drug soon and…” The nurse is gone.

The medical team gets Willa stabilized. Jackie insists on staying the night so Frank drops Zip off at her place and drives home. A nurse brings Jackie a pillow and she curls around it in a chair. It’s quiet in the room, with only the beeps of the machines and Willa’s breathing. This is a first for Jackie, sleeping in an emergency room, like so many other firsts in San Francisco.

Jackie was a cheerleader at Pearland High School, a damn good one – her squad made the cover of Texas Cheerleader magazine in her senior year. Then a scholarship to Texas Southern University, a drama/dance and psychology double major – she famously played Roxie in Chicago and Desdemona in Othello in the same year. Then a string of day jobs and unpaid roles in small theaters around Houston until, seven years ago, three of her old cheerleading pals dragged her along to an audition in San Francisco. None of them got into Cirque du Soleil as dancers but one of the judges told Jackie she should try again, as a clown. That moment, the idea of being a clown, kept her in San Francisco, going to every circus she could find, from family friendly to flat out burlesque, schmoozing up everyone until she finally got invited to join Hetty du Brun’s clown school. She met Willa when she taught a class on pratfalls. Jackie was smitten. She went to every show Willa directed and every class she taught.

When Jackie started performing after she graduated, Willa came to some of her shows – this was their courtship, watching each other work. Finally, Jackie screwed up the courage to ask Willa to direct a new act, a clown strip tease. After the second rehearsal, they went back to Willa’s place to work on a duet strip tease.

By now, they are not exactly a couple, not exactly sisters, just close enough for Jackie to drop everything to curl up in a chair beside a hospital bed so she can be there when Willa wakes up.

In the morning, the day-shift doc gets Willa moved out of the ER and into the Intensive Care Unit.

Three days later that they move her again, into a regular inpatient unit.

Frank, Zip, Virginia Barre, Tina Edgars, Isabel Sanchez and a dozen more friends, Willa’s circus family, visit every day. Jackie, who sleeps at the hospital every night, has them all organized into shifts. Zip jokes that they’ve joined the 4-H Club: Hospital, Hustle (for work), Hop (into bed) and Hope (the next day is better).

Late in the afternoon of her fifth day in the hospital, Willa’s eyes slide open and her mind is finally clear. Without moving her head, she scans the small room, stopping to stare at Frank Singer looking out the window at a sparkling San Francisco fall day. She traces the long line of his back and the set of his shaggy head. Why is this man, so different from her family in Tennessee, standing guard in her room? How did she get here?

Early on, Willa had tried finding a mate, a better half, but the touring life keeps performers single. At one point, she’d even wanted a baby but in this business, you have to travel light – no diapers, strollers or porta-cribs. Still, everybody needs love and security, even road warrior clowns.

Willa first came to San Francisco fresh out of Ringling Clown College in Sarasota, graduating a couple of years after Hetty de Brun. The Ringling folks hadn’t offered her a contract and she wasn’t about to go home to Tennessee with her tail between her legs. Instead, she headed west to join the nascent “new circus” movement. Frank was a wild haired juggler with a circus so small and so broke that they rehearsed in city parks; a far cry from The Greatest Show on Earth at Madison Square Garden but still, it was work.

On her first day with Frank’s troupe, Willa showed up at the park in full Ringling regalia – red wig, white face with black and red accents, multi-colored coat, baggy pants and huge flap shoes. To Frank, she was the enemy, the kind of clown he and his friends were going to eradicate. To Willa, Frank was an amateur. But he needed another performer and she needed the work so they rehearsed and performed on the street and in schools and at hippy festivals in tiny Northern California towns. Together they did the hard labor of turning an audience, a group of strangers, into a laughing, loving band of brothers and sisters. At the end of every show, they held each other’s hands to bow. Slowly, time and work thawed the chill and somewhere in there they became family.

Now Willa has a big family. Her exes become besties, her students become mentees and eventually almost everyone becomes a relative. She goes to their shows, helps re-write their resumes and holds everyone’s hands when their hearts are breaking. She is salt-of-the-earth pragmatic but unafraid of any emotion, no matter how dark or violent or pathetic. She loves people, warts and all. Maybe she loves people because of their warts. And she loves Frank because he sees her warts, he sees how frail she really is, fragile in body and mind, and yet, here he is, standing guard.