Early Morning in the Mission 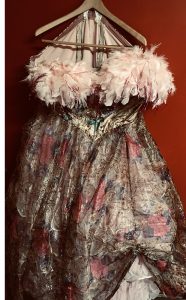 A huge pink dress lies over Frank Singer’s right shoulder. The hanger hook digs into the first two fingers of his right hand. It’s raining in San Francisco’s Sunny Mission and the theater is still three blocks away. Frank puts his head down and keeps walking. With every step, a small duffel bag full of juggling clubs bounces against his left hip. His regular clown costume, a plus-sized red and black tuxedo, is hanging awkwardly off the duffel’s strap and the matching clown shoes are slung around Frank’s neck like a giant pair of sneakers dangling from a telephone line.

Willa Woods is supposed to be walking to the theater right now, in the rain. She’s supposed to be directing the tech rehearsal for their friend Hetty de Brun’s memorial show. When Frank heard Willa get up in the night, sick from chemo, he stupidly offered to lead the morning rehearsal. She argued and even got mad at Frank for treating her “like some cancer-ridden useless piece of shit” but when she couldn’t stay out of the bathroom long enough to get dressed, Willa relented. She promised Frank she’d be at the theater by noon to take over.

Hetty de Brun, Willa Woods and Frank Singer worked together in a funky little circus when they were all in their early twenties. The troupe broke up but they stayed friends and then, slowly, as sometimes happens between wildly independent itinerant performers, they became family. Now Hetty is dead from the aftermath of radiation treatments the docs gave her for lung cancer thirty years ago, Willa is getting the modern poison to cure her breast cancer and Frank is trying to be a mensch, to step up when his friends need him most.

All this death and dying is making Frank Singer’s life complicated.

Frank shifts the dress on his shoulder and pulls one of the clown shoes down so it stops bumping his neck. Predictably, the other shoe kicks him in the chin. He keeps walking.

Being a mensch is a pain in the ass.

Frank crosses Florida Street to avoid tripping on a homeless guy in a wet sleeping bag. As he steps up on the opposite sidewalk, his phone starts playing “I Can’t Get No Satisfaction.” He frantically digs through his pockets with his free hand and the dress slips off his fingers. It slides to the pavement, Mick Jagger keeps singing and Frank keeps digging.

This could be his mother. Or worse, it could be Berit Aagbergsdotter, his mother’s Norwegian home care assistant. A couple of weeks ago, Frank had answered a call from Berit asking him to come right over. He’d driven to Berkeley and sat, stunned, as his mother, happier than he’s seen her in years, explained that she’d decided to “die on her own terms.” She refused to go into details but said she’d tell Frank when the “time is right.” Is this the call? Is the time right now?